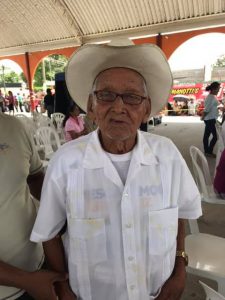 This is Alberto Perez. He is 98 years old and came to the eyeglass clinic for his first pair of glasses. He has a wife, one son, and 20 grandkids.

He has no schooling at all, but rather he started working in the fields at age 8. He cut sugar cane, cleaned fields, picked beans… whatever work he could find to do. And at age 98 he is still working the fields using a machete to cut cane and earns the wages of a day laborer. The farthest he has ever traveled is the next state over and that was to find work. He stayed 2 months and returned home.

His advice to young people is get an education so you can get a better job. The biggest problem in the world today is too much injustice. 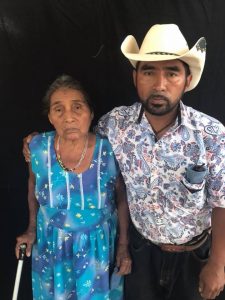 This is Dolores Heredia Cabrera and her son Miguel. They live on an island in the middle of this huge lake. The island is called El Pescado, which means little fish.

Miguel rowed their small boat 1 1/2 hours to get from their island to the mainland. There is a motorboat taxi available which reduces the ride to 20 minutes, but it cost 150 pesos ($8 USD) – a cost they cannot afford. After the rowboat, Dolores and Miguel walked 500 yards to the road to catch a ride. Dolores is disabled and walks with a lot of difficulty. After reaching the road, they took a taxi truck (10 pesos or 60 cents) for a 30–minute ride to downtown Ojitlan, the town where we held the clinic. After another taxi drove them to the clinic site, it took them about three hours to complete the clinic process and receive their glasses.

Dolores is 69 and Miguel is 40. They both received their first pair of glasses.
Dolores wanted glasses because her vision is so poor she cannot do anything around the house. Now she intends to do household chores to help out. Miguel takes care of his mother Dolores and his 79 year old father. He works in the family field on the island growing corn, beans, squash and other vegetables on season. Miguel was born on the island and has lived there his whole life. To earn money, he makes cement blocks by hand to sell. Miguel needed glasses for distance to help with his agricultural duties.

Dolores only speaks the Chinanteco dialect and she never went to school. Miguel speaks both Spanish and dialect and went school to the 6th grade.

They live a hard life and were very appreciative for the glasses, a luxury they would never be able to afford.

This is Julian Ramirez. She is 93 years old and is still very active. She still does housework and used to make dresses like the one she is wearing here. She and her husband raised 13 children in the rural mountains of southern Mexico. They only had a few small fields where they raised and sold coffee as their only source of income. Julian worked with her husband in the fields doing the planting, weeding, spraying and harvesting all by hand. The coffee did not bring in enough income to support the family so they lived a very meager existence, eating mostly hot peppers and tomatoes. They also ate whatever they could find growing wild like llerbamora, a leafy weed that grows wild. These days life is better for Julian since the kids are raised and ten live nearby and can help support her. 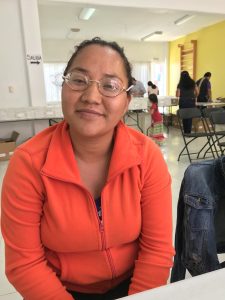 Loiena walked 20 minutes to come to the eyeglass clinic. She was 25 years old and had three young children with her to keep track of and one had special needs. She arrived at 9:30 am but by that time a lot of other people had already come so she was very far back in the line. Loiena had to wait in line 8 hours with her children to finally receive the eyeglasses she came for. Her vision was very poor and this was her first pair of glasses. She received a -11.50 pair of Reader glasses and when she put them on for the first time a big smile came across her face. She was fortunate to have finished school but admitted it had been pretty difficult with her vision. Now all the tasks a mother is required to do will be easier for her to accomplish.

When asked if waiting in line 8 hours to get glasses was worth it, she quickly responded yes – it was definitely worth it. She went home very happy.

This is Olga Ramirez Lopez. She is 98 years old. It was a challenge for Olga to get to the eyeglass clinic because she is confined to a wheelchair and lives some distance away in a neighboring town. So her family loaded her in the back of a pickup truck, wheelchair and all, and drove her to the clinic. She was married when she was 22 years old. She had 6 children but only three survived to early childhood. Her husband died when she was in her late 30’s so she was left to raise her children alone. Life was difficult but she worked washing clothes for hire and made homemade candy to sell. She managed to make it by on her own and now her children are grown and all live nearby.

Olga was mobile and walking unassisted until 6 months ago when she fell and broke her hip. Now she is confined to a wheelchair. While she was in the hospital some ladies visited her and shared the good news of the gospel. Olga experienced the saving grace of Jesus Christ while in the hospital. Now she has a strong desire to read her Bible daily but unfortunately her eyesight is very poor and she in unable to read. Fortunately, she made it to the clinic and was given her first pair of eyeglasses which corrected her reading vision to 20/20, perfect! Olga left a happy person and was glad for the gift of free glasses.

This is Oswalto. He is 26 years old. He came to the eyeglass clinic for glasses. He arrived at 9am and had to wait in line until 3pm to get into the clinic. There was a big rush of people for the clinic on the last day. His vision has been very poor his whole life. When he was 10, he was given a pair of glasses at a hospital – but they were not the right prescription and didn’t work for him. So, he didn’t wear them. He has not been able to afford glasses since he has a wife and two children and only earns the equivalent of $55 USD per week as a technician. He had to take off work to come to the clinic and lost a day’s wages.
We were able to correct his vision with a pair of Reader glasses. He was very happy with the results. We asked if it was worth missing work to get glasses and he said it definitely was. Being able to see was worth a lot to him. He can work better and do other things in life that he could not do very well before.

It doesn’t take a lot to help someone who has very little. 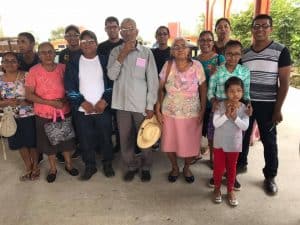 This is the Hernandez family. All 14 came to the eyeglass clinic and 13 received glasses – most of them for the first time. They all live on the same farm and work the farm together.

The parents are Donasiano and Delfina standing in the middle. Pictured here are 4 generations. Their family has owned their farm back many generations, even before Donasiano who was raised on it. They grow corn and beans for both consumption and to sell. All farm work is done by hand, except for a few times when they rent a tractor to help with a difficult task. Everybody has a job to do on the farm. The girl in the checkered shirt is 11 years old. Her job is to spread the fertilizer using a backpack with a tube to feed it down the rows. She enjoys working on the farm but plans to be a petroleum engineer when she grows up.

They were very grateful for the eyeglasses and later brought us back some pineapples as a thank you gift.

You know a person likes their new glasses when they give you a bear hug you can’t get away from! This is 91– year–old Tolentina Jacome Rios who just received her first pair of glasses. She arrived at the clinic at 9am and waited in line 3 hours to get glasses.

She was born and raised on a farm and has good memories of playing with her friends and going swimming in the river. The worst thing about farm life was they were very poor. They had no electricity, no running water and washed their clothes by hand in the river. Mostly all they had to eat were sauce and beans that they raised themselves.

But, on occasion, they might have a chicken to eat.

Life is better now because she lives with her son. He works the fields as a laborer. She has a lot of grandchildren but says there’s too many to count.

She has lived many years and seen many things. When asked if she has any good advice for people she says yes – you should prepare yourself for when Jesus comes so that if you are prepared you will go to live with him forever. That is the most important thing to do in your life.

The best way to reach us is through our contact form or email us directly. We'll get back to you ASAP!